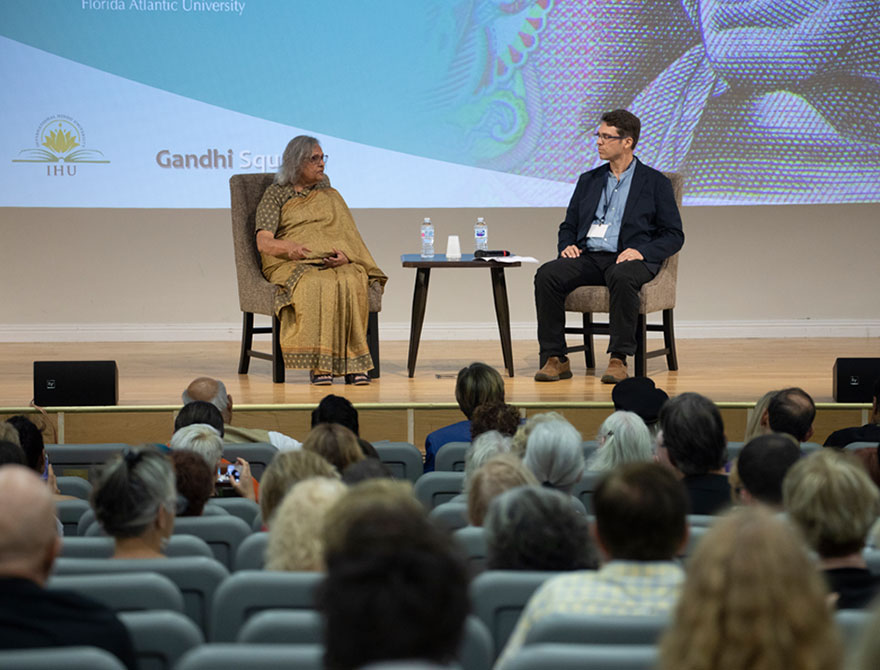 Ela Gandhi: A Life for Peace, from Apartheid to Democracy

The Osher Lifelong Learning Institute (OLLI), Boca Raton and the Dorothy F. Schmidt College of Arts and Letters at Florida Atlantic University (FAU) will present a lecture by Ela Gandhi, a peace activist and granddaughter of Mahatma Gandhi on Monday, October 21, 2019, at 4 p.m. in the Osher Lifelong Learning Institute Auditorium on the FAU Boca Raton campus. Tickets are available at fauevents.com and the olliboca.fau.edu websites.

Gandhi will be sharing her message of social justice gathered during a lifetime establishing democracy, using nonviolence to overcome a segregated Apartheid South African regime.  Born in South Africa, she fought against discrimination and faced persecution and house arrest by the Apartheid regime that she helped to defeat.

Gandhi is the daughter of Gandhi’s second son, Manilal. Born in the Phoenix Settlement in South Africa, she earned a BA at Natal University and then worked as a social worker. She was vice president of the Natal Indian Congress, and served with the United Democratic Front and the Natal Organisation of Women. For her civil rights work she was subject to house arrest and banning for nine years by the Apartheid South African regime from 1975. Gandhi was a member of the Transitional Executive Council to establish a non-racial democracy in the historic election of 1994 that brought Nelson Mandela to the presidency. She subsequently served as a Member of the South African Parliament from 1994 to 2004, helping to deconstruct apartheid. She was the Chancellor of Durban University of Technology and has won many awards for her humanitarian and peacemaking work and is honored as a veteran of the Umkhonto we Sizwe (African National Congress).