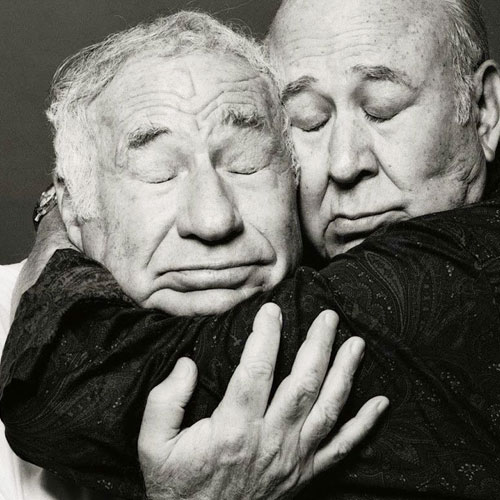 Bronx-born Carl Reiner and Brooklyn-born Melvin Kaminsky (aka Mel Brooks) met for the first time in 1950 when the legendary Sid Caesar brought them together for “Your Show of Shows.” Brooks (who had been a childhood friend of Caesar) became part of the comedy writing team that included Neil Simon, Larry Gelbart, Mel Tolkin, and -briefly- Woody Allen. Reiner was brought in as a supporting actor but soon started contributing as a writer himself. Brooks and Reiner hit it off immediately and would often attend cocktail parties where they would improvise comedy routines. At one of these parties, Reiner held up an invisible microphone and said, “Is it true, sir, that you were present at the crucifixion?” to which Brooks sighed and replied in a heavy Yiddish accent, “Oh boy…” And the 2000-Year-Old Man was born. Individually, Reiner and Brooks went on to create the greatest comedy classics of their day. Their deep friendship withstood the test of time, lasting for almost seven decades.