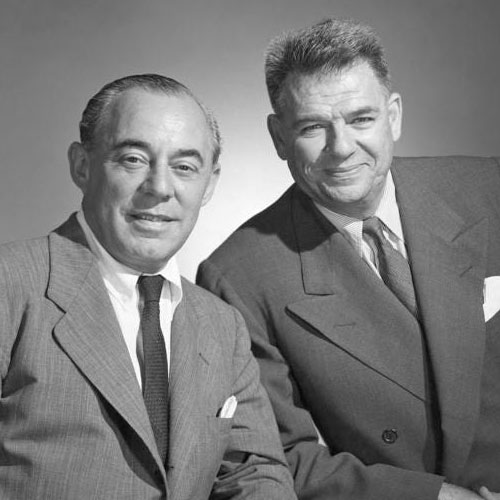 WPL01104 – An Enchanted Evening with Rodgers and Hammerstein

The St. James Theatre was partially filled at the premiere on March 31, 1943, and palpable anxiety ruffled a number of patrons. The legendary Theatre Guild had not fielded a successful production since The “Philadelphia Story” in 1939, and another failure would provoke bankruptcy. As the curtain rose, there was a cause for concern. Five years and over 2,000 performances later, “Oklahoma!” was still running at the St. James, and for 16 years, the songwriting team of Richard Rodgers and Oscar Hammerstein II continued to stimulate and entertain audiences worldwide with their novel brand of musical play, which wove book, music, lyrics, and dance into a seamless tapestry of near-perfect theater art. Hit after hit flowed from their collective geniuses between “Oklahoma!” and Hammerstein’s death in 1960. Along the way, a few “misses” were tossed in to confirm their mortality. Through original cast recordings, film clips, interviews, correspondence, and other primary materials furnished by The Library of Congress and The Rodgers and Hammerstein Organization, learn about the lives of these two icons of the American musical, experience their great productions, and listen to their music which has kept the American public hopeful through wars, recessions, natural disasters, and political intrigue.