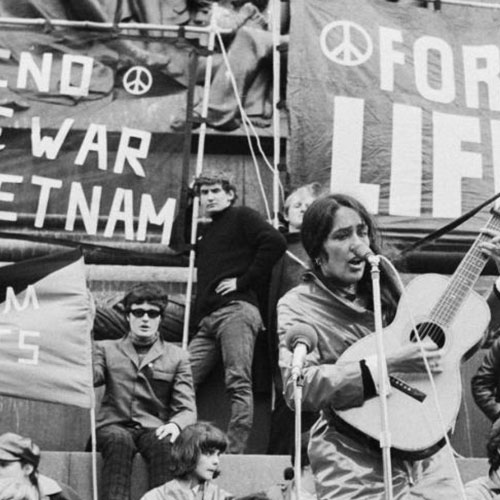 When you think of protest songs from the sixties and seventies, you’d likely think of folk songs by Woody Guthrie or Pete Seeger and the Weavers or the old labor and civil rights songs. However, in this program, they will discuss and sing protest songs by artists who are more associated with the folk-rock, rock, and pop genres of the 60s and 70s. In some cases, artistÕs songs became so popular; listeners may not have realized what they were really about. The social message about war, the Vietnam War, civil rights, womenÕs rights, human kindness, or other pressing issues of the time and of today contained in them may have been missed. Based on lists by Rolling Stone Magazine and other reputable sources, the PinkSlip Duo will discuss and sing some of the top pop protest songs of the 60s and 70s, songs written and/or recorded by Dylan, the Beatles, Simon and Garfunkel, Crosby Stills & Nash and Young, Buffalo Springfield, Janis Ian, Buffy St. Marie, Country Joe and the Fish, Barry McGuire, Phil Ochs, Marvin Gaye and others. As always, their fascinating stories will include evocative slides and the songs will include lyrics so the audience can sing along while thoroughly enjoying the nostalgia.